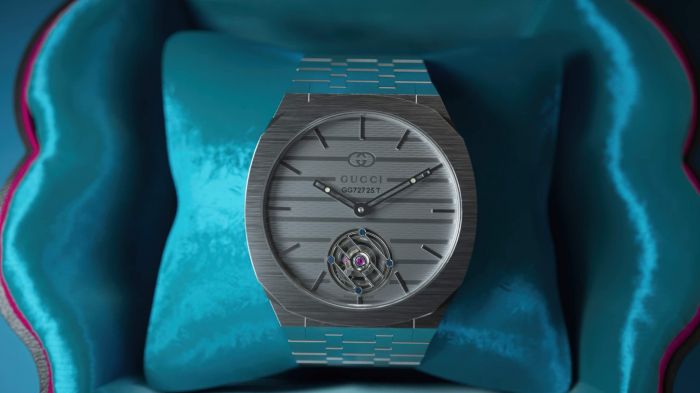 Gucci is celebrating its centenary with the launch of a high watchmaking collection, ramped up by the introduction of its first movement by parent company Kering. The in-house automatic Caliber GG727.25 makes its debut in the Gucci 25H, an ultra-slim timepiece collection available in stainless steel or precious metal. 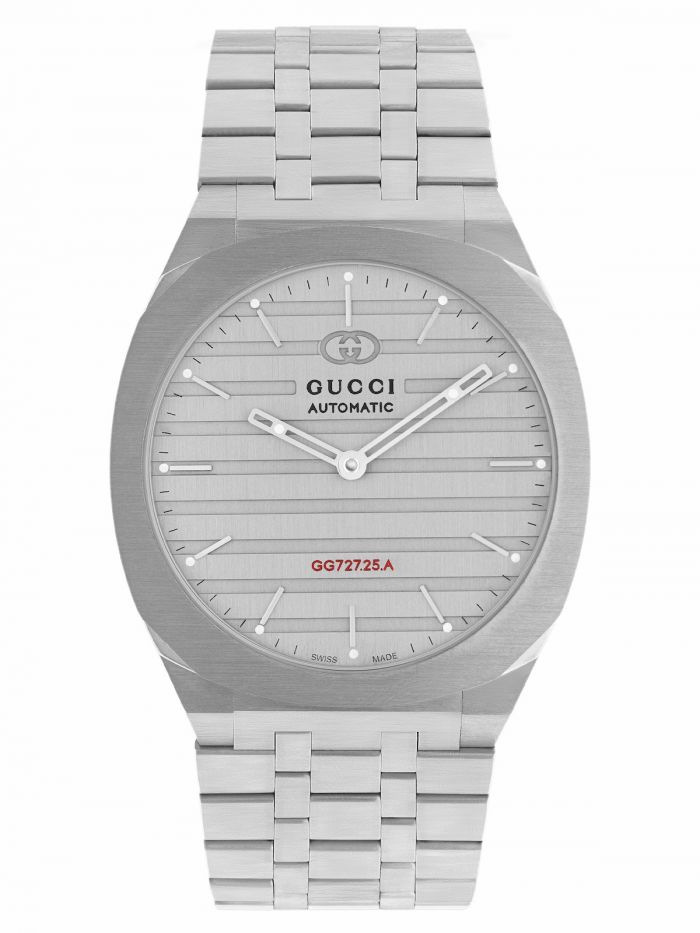 The Paris-based Kering, which also claims Ulysse Nardin and Girard-Perregaux among its portfolio of luxury brands, designed and developed the movement, which is a product of Kering’s own manufacture in La Chaux-de-Fonds. And at just 3.70mm thick, the new movement is the perfect pairing for the 25H’s own slender profile, measuring a mere 7.2mm. 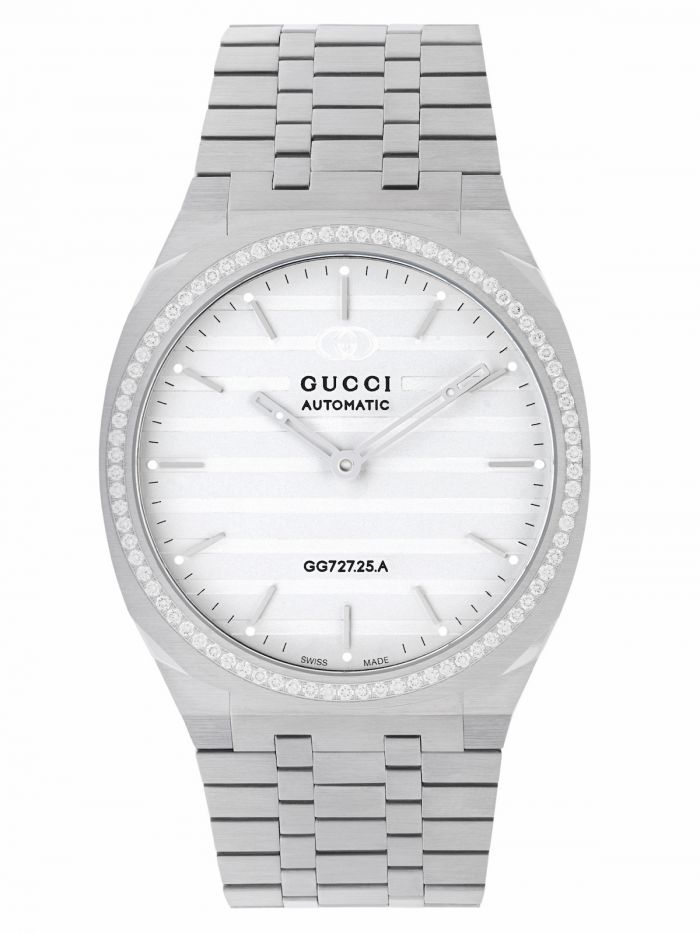 Two tourbillon versions are also part of the new collection, and their cases measure slightly thicker, at 8mm. The self-winding 24-jewel movement, visible through the case back, features sixty hours of power reserve, and it runs at 21,600 BPH or 3Hz. 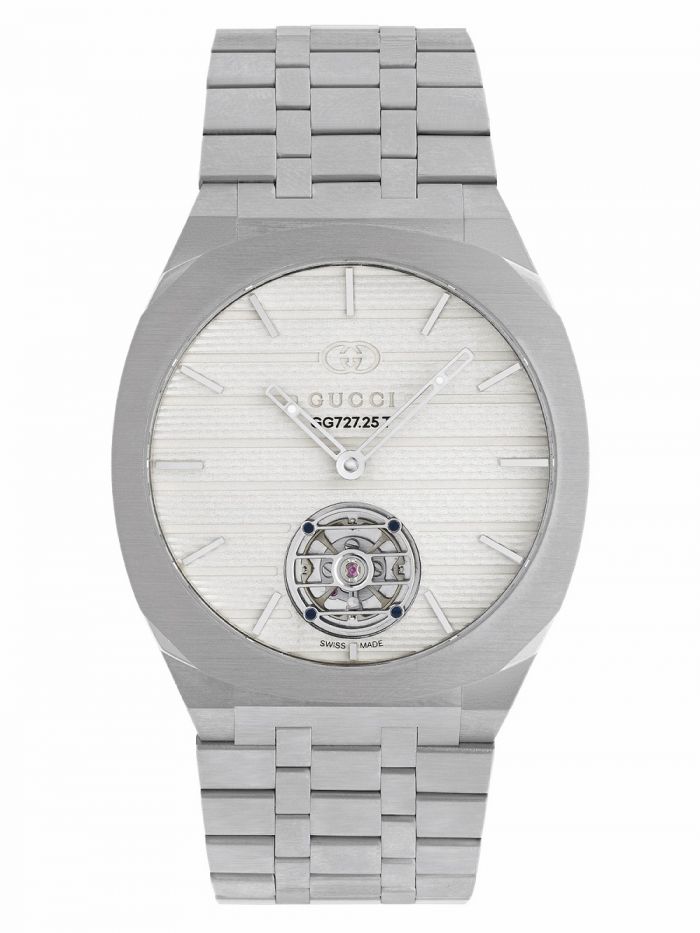 Two tourbillon watches are also part of the new Gucci 25H collection. This model is cased in platinum.

The 40mm timepiece, designed by Gucci creative director Alessandro Michele, seamlessly morphs from sporty status in steel to a more formal designation when dressed in yellow gold or platinum, as in the tourbillon versions. The minimalist dial of the 25H marks the hours with simple indices, while skeletonized hands—dotted with luminescence—traverse the satin-brushed lined décor.

Here, too, the movement is given its proper due, with GG727.25 prominently displayed front and center, along with Gucci’s double-G logo at 12 o’clock. 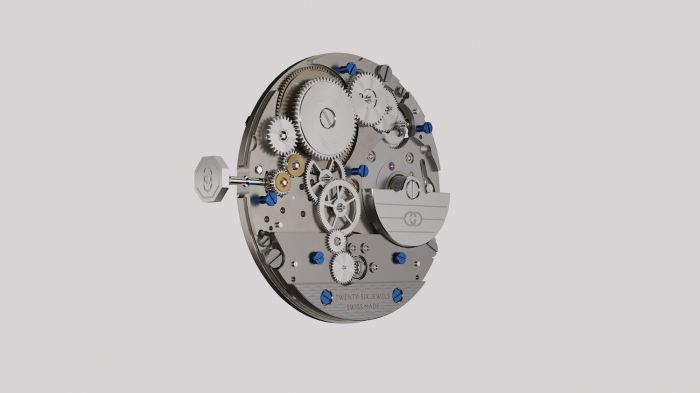 The in-house automatic Caliber GG727.25 makes its debut in the Gucci 25H.

The tourbillon variations are marked GG727.25.T. Not so incidentally, even the movement identifications have significance: Michele considers the numerical designation talismanic. 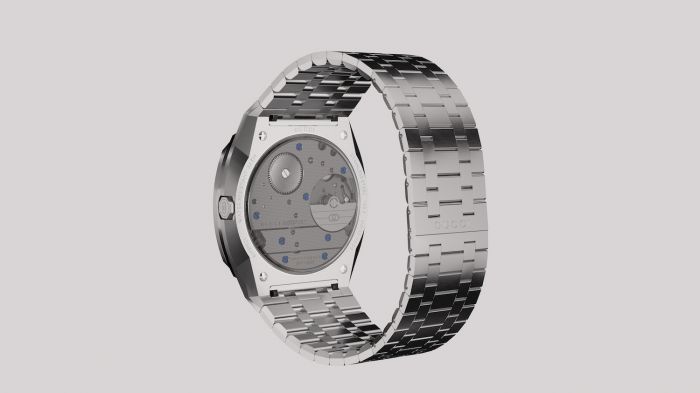 The Caliber Gucci GG727.25 is visible through the sapphire-crystal caseback of the Gucci 25H Automatic Steel.

The watch’s precision-crafted bezel obscures the crown, making it nearly invisible, and this unique architecture lends a seamless quality to the overall design, while also enhancing the fit. The five-link bracelet is both comfortable and handsome, and augments Gucci’s goal of making the timepiece “like a second skin on the wrist.” 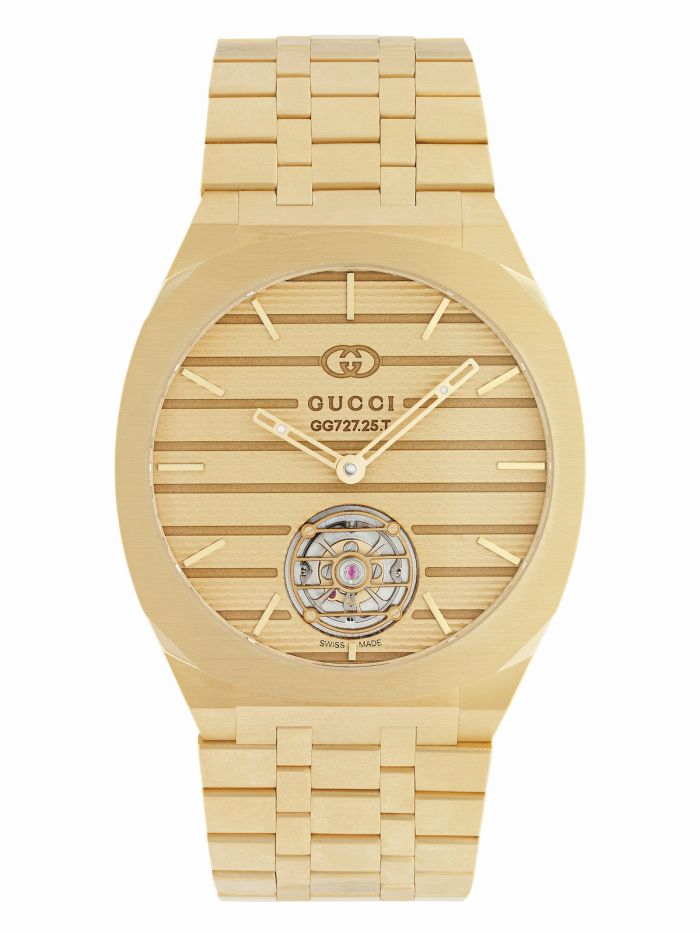