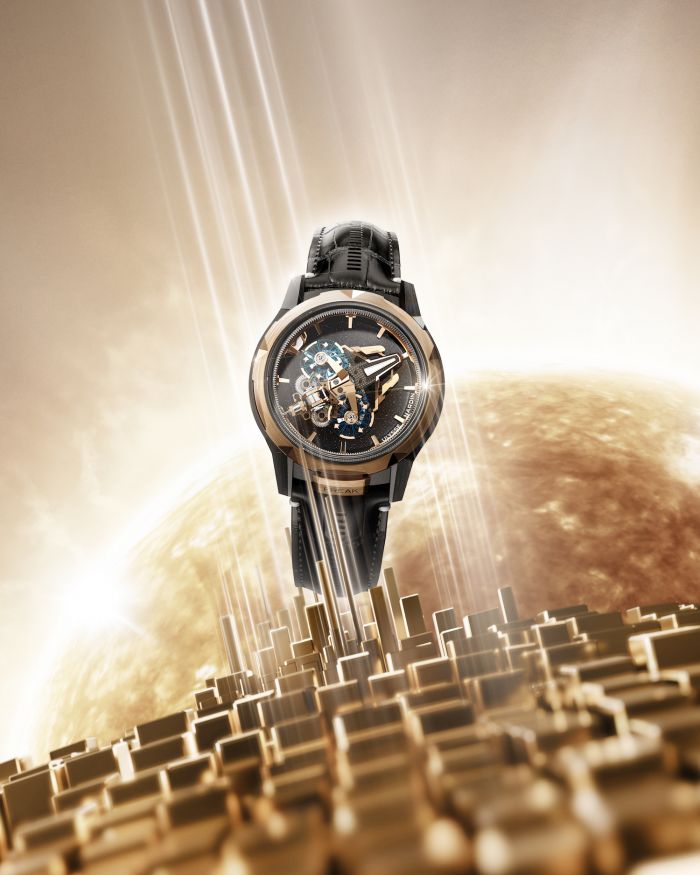 Ulysse Nardin updates its already legendary hands-free, dial-free, and crown-free Freak with a double oscillator, a technical flourish that deepens its three-dimensional effect while strengthening its efficiency and precision.

As Ulysse Nardin’s highlight debut at Watches & Wonders 2022, the new Freak S marks the premiere of the new UN-251 Manufacture movement. The new caliber dramatically hosts a new blued “DiamonSIL” (diamond-coated silicon) double oscillator with each balance wheel inclined at a 20-degree angle and linked by a differential. 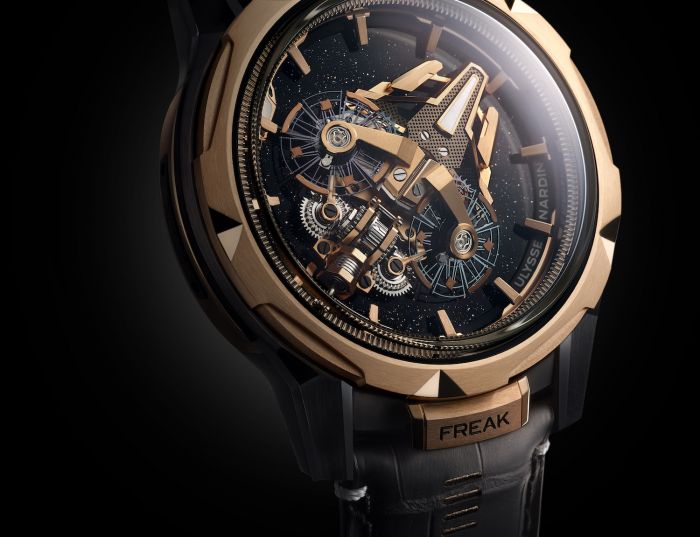 Ulysse Nardin explains that the multi-gear differential, clearly visible between the balance wheels, evenly distributes the barrel’s energy to the two regulating organs, so that the Freak S’ amplitude remains stable. 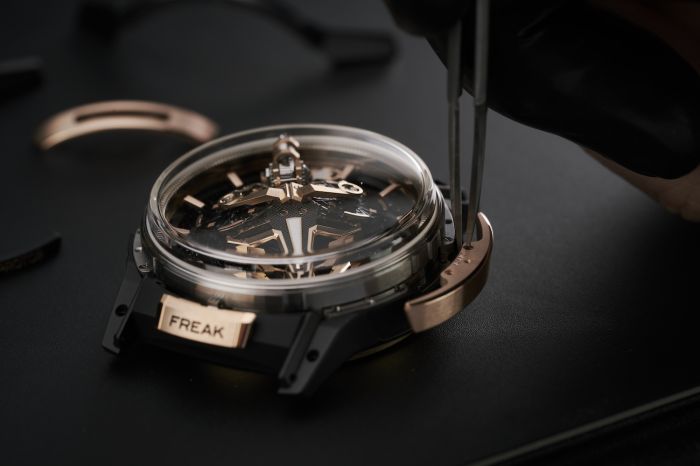 The visual effect, centered with a pair of rose gold bridges holding the two blue oscillators, recalls a rocket wing.

Remember, as a carousel the Freak’s entire movement makes a complete rotation in one hour. A broad arrow on the watch’s aventurine movement plate shows the hour while the longer nose cone of the rocket with the balance wheels and the escapement indicates the minutes. The Freak S’ time is set by rotating the bezel in a clockwise or counterclockwise direction. 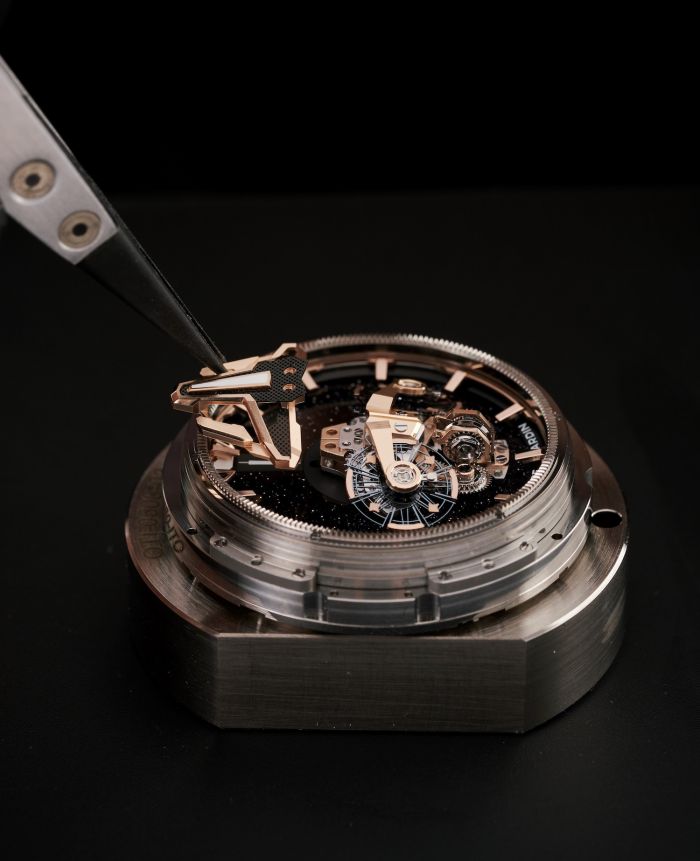 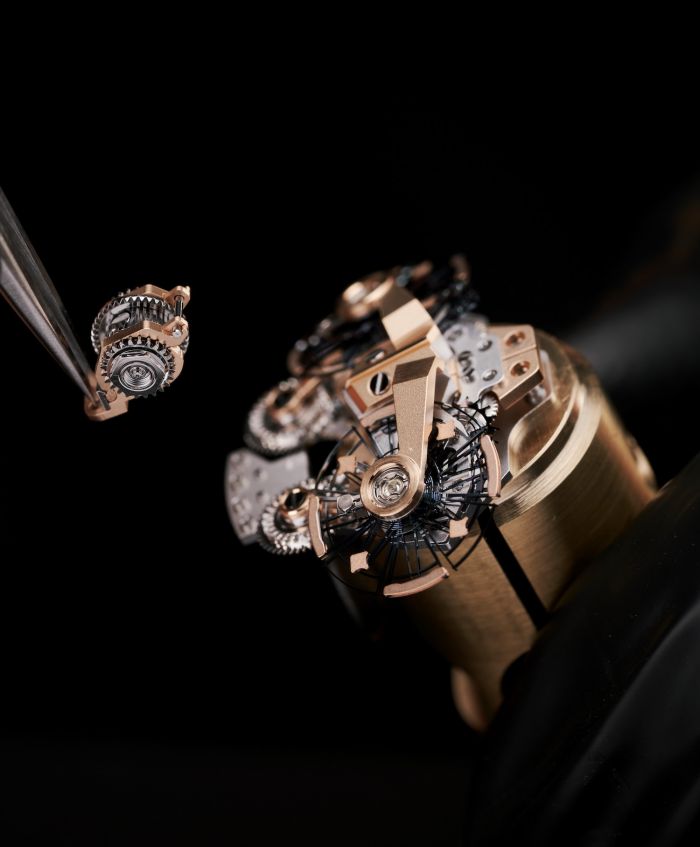 Ulysse Nardin will make the Freak S as a limited edition of seventy-five pieces, of which forty will be made this year. Every watch is fitted with an alligator strap decorated with a Sport cutout in rose gold color. The timepiece is fitted with a self-folding clasp system in titanium with black DLC. 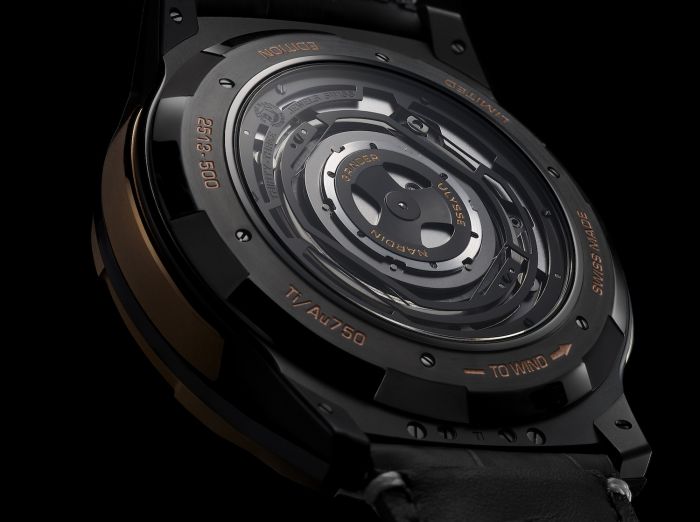 Case: 45mm black ceramic, titanium with black DLC and rose gold. ?Time set with the front bezel, and lever lock. ?Manual winding is possible with the back bezel.

Decorative movement plate in black aventurine. ?30 meters water resistance, a sapphire domed box with anti-reflective treatment on both sides. Back: Titanium with black DLC, 6 screws, visible “Grinder” through an open sapphire case back.