It’s double ampoule season! I know it seems strange seeing two successive ampoule reviews on BeautyLab but this made it easier for me to see if these two similar products are on par with each other.

For the past month, I’ve been using LadyKin’s Triple Fantasy Brilliant Repairing Ampoule. It sounds like a Victorian romance novel title — but with a more tempered and realistic ending, I should say. On many personal blogs and in forums like Reddit, this ampoule is said to be a dupe of Estee Lauder’s Advanced Night Repair, which I’ve never used. There are many things to keep in mind about why people prefer originals over dupes and vice versa. As always, YMMV. 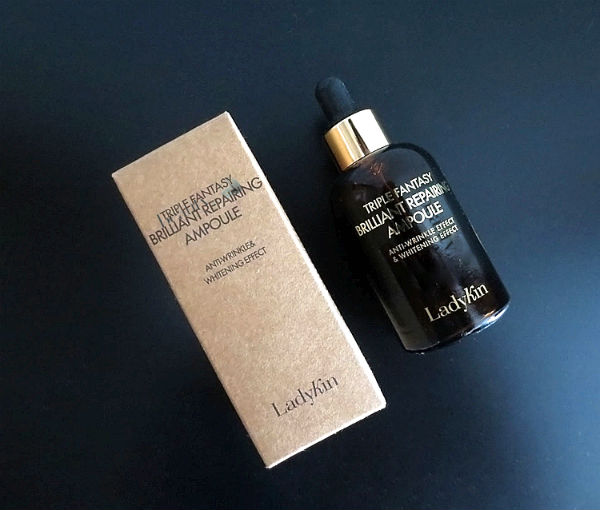 Now, this 50ml bottle was a revelation from the moment I received it. While the Missha LongName ampoule was all arrayed in royal purple with pinkish tones, the LadyKin Triple Fantasy Ampoule is like Cinderella pre-godmother makeover by comparison. The box is plain and brown and something you’d probably pass over on the shelf. But once you see the bottle, it showcases both simplicity and elegance. The gold letters and detail on the dropper cap play off nicely with the slightly matte yet glossy brown bottle. The price tag is also very easy on the eyes at US$15.21. 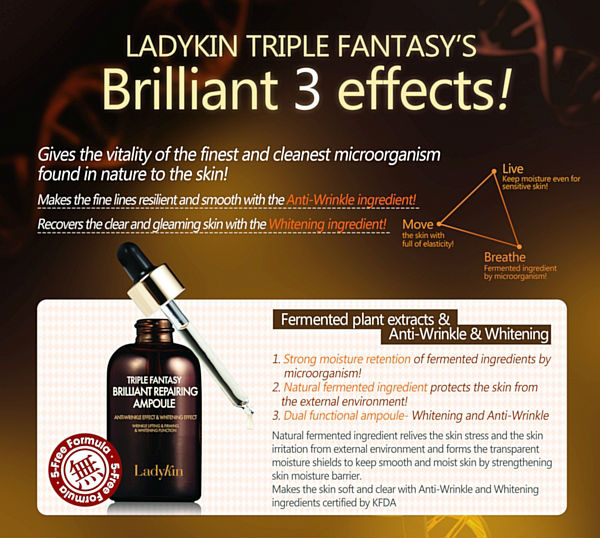 The “Triple Fantasy” refers to its whitening, anti-wrinkle and moisturizing benefits. While whitening my skin doesn’t exactly figure in any of my fantasies, an even skin tone does so I’m hoping the ampoule will help me achieve that. Anti-wrinkle and moisture retention are also something I can totally get on board with because it’s getting cooler here in Hong Kong and winter is coming (Team Lyanna Mormont!). I’m a belated but now firm believer that “anti-wrinkle” products are no longer relegated to a certain age bracket. If you’re in your 20s and you want to delay those forehead lines and eye bags a little longer (perhaps caused by too much Netflix, study hours, and Snapchatting), be proactive in being preventive!

A combination of fermented ingredients like natto gum, galactomyces ferment filtrate, streptococcus ferment filtrate (a lactic acid ferment used in making yogurt), lactobacillus/soymilk ferment filtrate (to help strengthen and protect skin’s moisture barrier), plus sodium hyaluronate (a humectant) and niacinamide (for brightening) lead the ingredients list. I am pleased to note that fragrance is listed near the bottom of the list. There isn’t any heavy fragrance in the product as far as I can tell but for those with sensitive noses or with an allergy to fragrances, you might want to keep this in mind. For the full list of ingredients along with any possible acne triggers, here’s a link to its COSDNA page.

For the fluid itself, I was expecting something quite identical to the Missha Borabit ampoule which is slightly thick and yellowish. Instead, this ampoule is clearer and just a little more watery. As a result, my skin absorbed this more quickly and it left no detectable sheen on my face. In the first week when I used it only twice, there was a slight stinging on a spot on my left cheek. Other than that, application in the succeeding weeks went smoothly. I now use it three to four times a week at night, near the end of my evening skincare regimen. Some recent pimple scars near my brow are now slightly lighter and my forehead looks more even. 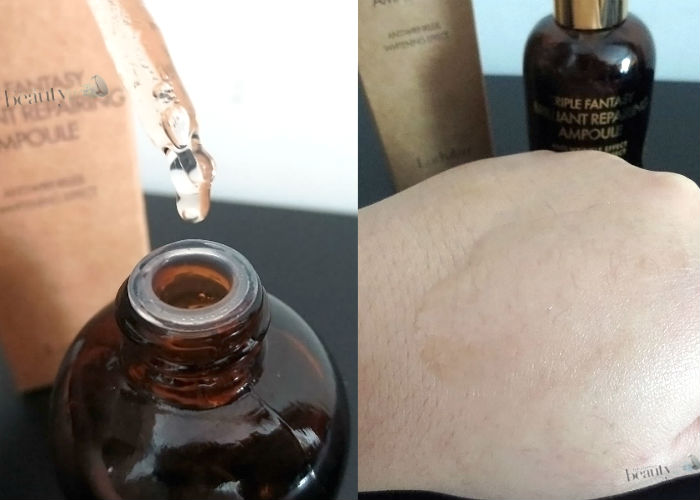 Because of its consistency, I think my ampoule will last me probably until the end of the year. I’m going to continue using it to see whether it can cope with my skin’s demands as the temperature here in Hong Kong drops. Would I repurchase this? With its very friendly price point and compatibility with my skin, it’s a resounding YES!