French luxury outdoor apparel brand Moncler, after having imposed its signature down jackets around the world, opened its first American flagship in a city that will definitely enjoy the warmth, the comfort and the style of their products: New York City. Two locations have been announced: Madison Avenue (main venue) and Prince Street, Soho.
Celebrating this grand opening, Moncler wanted to pay tribute to the Big Apple and imagined two art projects that would both enlighten NYC creativity and the brand’s experimental style. 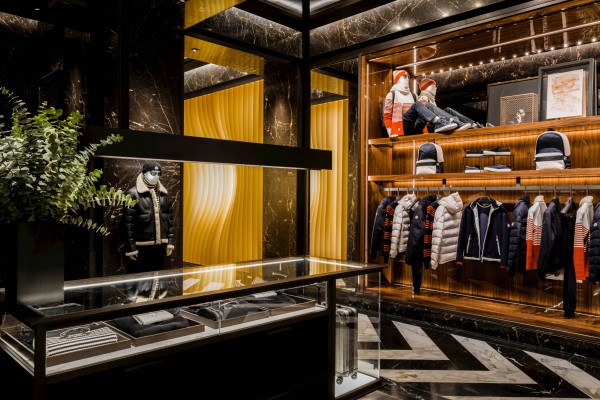 The first part of the tribute has been handed to Thom Browne. The stylist conceived an installation, called “USA Flag”, consisting of 28 special limited editions of the brand’s iconic jackets – same model, different design – all having the American as common theme. The jackets, each of them being unique and numbered, will be assembled to create mosaic decorating the background of the boutique before being sold online to benefit NPO Robin Hood.

Thom Browne also designed a full Special Collection, featuring jackets, cashmere sweaters and other special items, only available at the Madison Avenue boutique – and yes, they will all be Stars and Stripes.

The second part of that Tribute is a unique realization by famous NYC Film Director Spike Lee. His contribution, is a Short Musical Film celebrates the Big Apple’s heat of life and magical atmosphere.

The Film, called “Brave” – reference to the lead song, begins with Spike Lee himself reciting The Sonnet “The New Colossus, inscribed on The Pedestal of the Statue of Liberty.  “Lady Liberty’s Flame,” concluded Spike Lee, “welcomed millions of people arriving in the United States of America. Their first step onto American soil was in New York City. I hear that in this song, “Brave Suffering Beautiful”, which holds the essence of what it means to be an American in this particular period in time.”

Through Moncler’s tribute to New York, all can see the brand’s love and respect for the Big Apple. Thom Browne and Spike Lee bring their own vision of the common theme, making the project and innovative and exciting demonstration of Moncler’s personality.

Watch the full film below: