Last Friday, I was going through my feed on Facebook and saw an album of photos from my FB friend that made my jaw drop. I met Nivat a few times from when he was still living in Manila as an executive of an international airline company. But he has since left town, and is always traveling a lot and has already been to so many beautiful places.

He posted a series of photos on his private FB album that he had taken while in Tokyo. It really made me drool with envy and made me want to go on the next flight to Tokyo.

This was the 1st photo I saw:

I could not believe my eyes at first. I thought that LV would never throw a sale like this. It is mad! After reading through Nivat’s comments, I gathered that this was not an event mounted by Louis Vuitton but by an organization not affiliated with the brand. Of course I questioned the authencity of the mounds of LV bags that were for sale. Anyone would.

I did a little bit of research and found out also that this was an event that had reputable bag pawnshops from Japan participating. And Japan has a notorious reputation for prosecuting institutions that sell fake or counterfeit designer merchandise.

I posted one of his photos on both my instagram and Facebook accounts because according to Nivat, the sale ends on Sunday still. Since I couldn’t go, I hoped people who live in Tokyo can, and can share their experiences with me on it. I soooo badly wanted to fly to Tokyo but couldn’t on such short notice ? *Haha I was going to use my free airline miles for it*

That photo I shared on instagram and Facebook got so many people worked up. A handful have said without question (without knowing enough information themselves) that the bags being sold were fake. I even went on to have a silly verbal altercation on instagram with a lady from her adopted country of Denmark who claimed that the bags were fake for sure because this sale was not even talked about on the internet prior to my post. She went further by saying that in her country, authorities would never have allowed the sale of designer bags without proper receipts and such. Attempted to also mock my country for allowing counterfeits to be sold and owned by individuals. Sorry I just have to share the shallowness of the altercation– because really it got silly lol. Anyway it ended with her saying she would rather buy straight from the boutique, which she has. I thought she was rather snooty lol, but hey, that’s good for her that she can afford to buy her bags brand new from the boutique. But a number of people can’t and this was a great opportunity to finally be able to get their hands on one… or two! So I ended up blocking her lol (I’m a poor sport haha) because I don’t want to exchange any more words with her and I was already about to become rude because of her snooty attitude towards buying 2ndhand bags. Lol, much ado about nothing really (haha and the world has bigger problems but hey, we are after all talking fashion and shopping and having the opportunity to buy things at a bargain!) 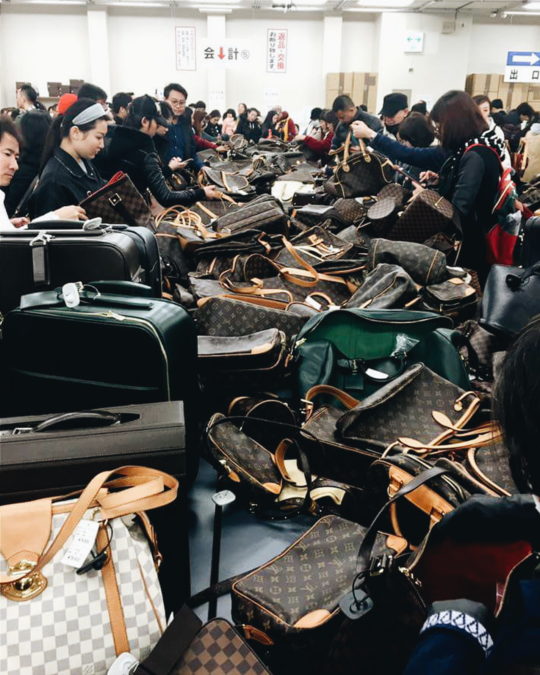 Heck, people lined up to get into this sale. And I was told by another instagrammer that the line was sooooooo long– a few street blocks long! It was in her words, “INSANE!!!!” and yes, in caps lock. She also said, “the bags are definitely authentic LV.” No fakes!!!

The sale was for some charity, and it was obviously a very successful one. It was held in Tokyo Ryutsu Center in Ota-ku.

One of the instagrammers who left a kind comment on my photo mentioned that there might be more of these in the future. I had asked her to give me a holler if and when that happens because seriously, I will save money and fly over for that! Like most of you peeps, I always love a good bargain!! Here’s hoping there will be one again in the next 6 to 8 months, and that we will all have time to prepare for it LOL!

P.S. That incredible photo taken by Nivat which I posted went on to be seen by over 2.2 million people, according to my Facebook page metrics. 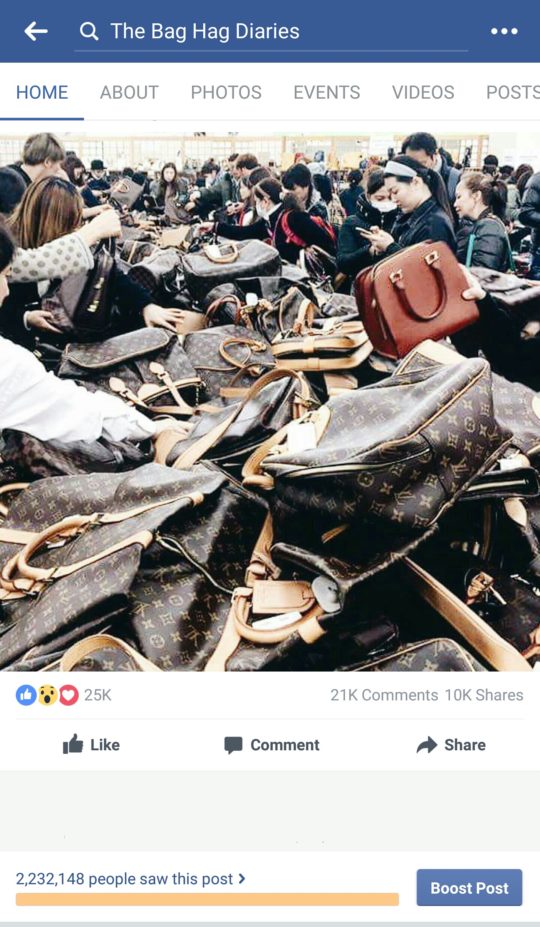 It is really wild! Thank you so much again Nivat Chan for sharing that album of photos on your Facebook or I wouldn’t have known about this crazy sale!!